Which islands should I visit in the Galapagos?

Best Galapagos Islands?
It’s the ‘how’, not the ‘what’ 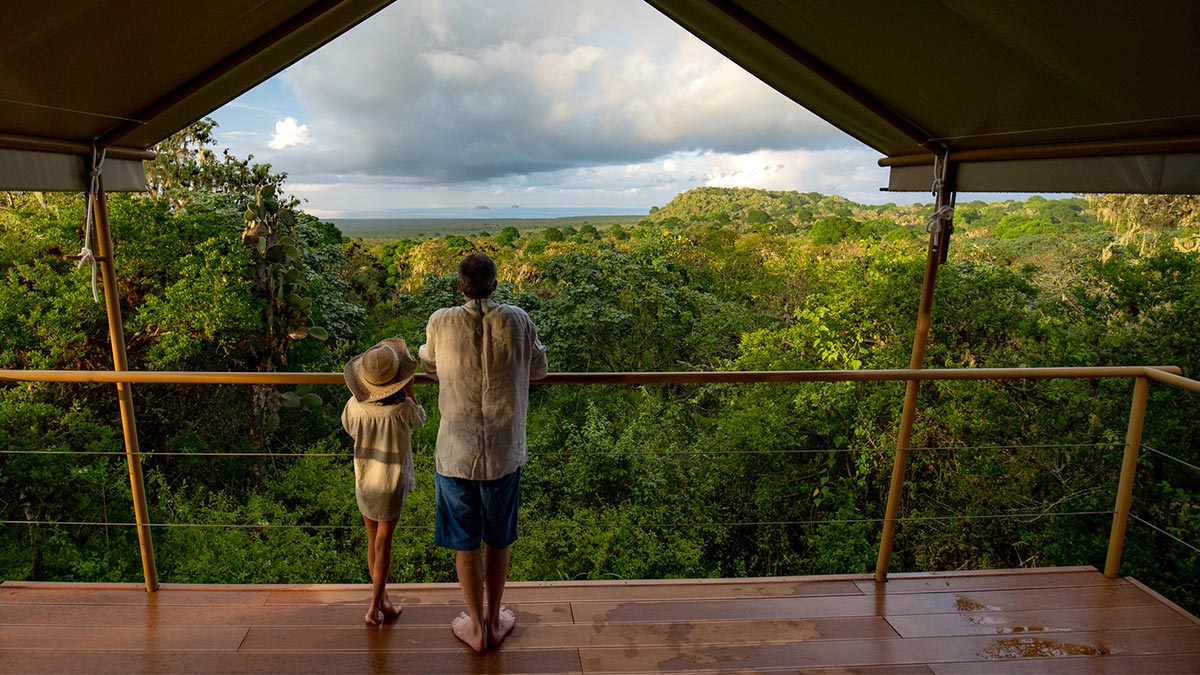 Providing you don’t have a targeted list of species to check off, and are happy looking out for the main flagship species, you won’t be disappointed with any of the islands.

At Galapagos Safari Camp, our goal has always been to offer a more intimate wildlife experience. Unlike many cruises, our Tailor-made Land-Based Safaris are not intended to squeeze in as many islands as possible within a one- or two-week period. Our focus is more on providing an authentic experience, one in which our guests can be fully immersed in wildlife – both day and night – so that they feel a deeper connection, not only with the Islands and their wildlife, but also with their loved ones as well as themselves.

All our Safaris are either fully private (with chartered boat and your own private guide throughout) or semi-private (your guide accompanies you on shared boat trips).

for a more intimate and personalized wildlife experience.

When Stephanie and Michael first arrived in the Galapagos, they lived at Galapagos Safari Camp for eight years, bringing up their children here, exploring all corners of the archipelago and creating bespoke itineraries for their guests. Although they are constantly tweaking their Safaris to enhance them further, the islands they visit, and more importantly their vision and goals, have remained the same.

Galapagos Islands we visit on our Land-Based Safaris

The Galapagos Island of Santa Cruz, where our camp is based, is at the heart of all our Safaris. From here, we also offer day trips to the uninhabited islands of North Seymour, Bartolomé, South Plazas and Santa Fe. Each offer a very different experience, both in terms of wildlife and landscape.

Our Safaris can also be extended to include the island of Isabela, the biggest island in the archipelago, and one of the youngest.

For more information on which Galapagos Islands to visit, and which islands might be best for you to visit, please consult our guide below or contact one of our Galapagos travel consultants. 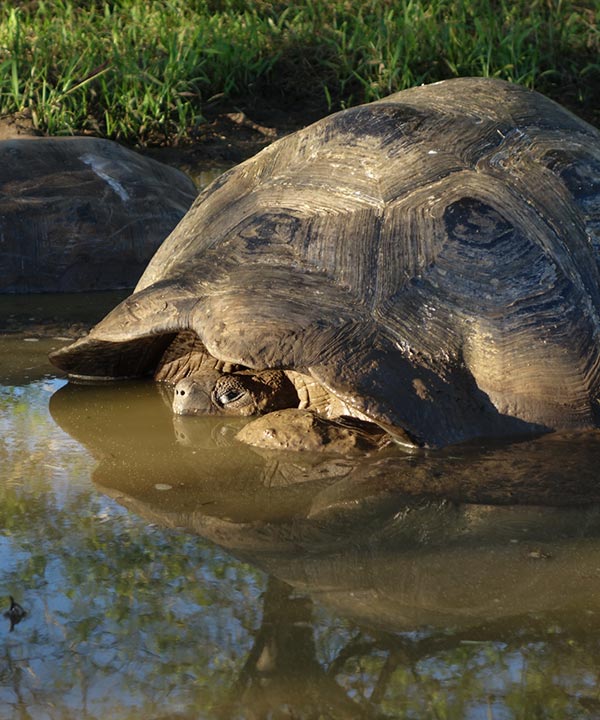 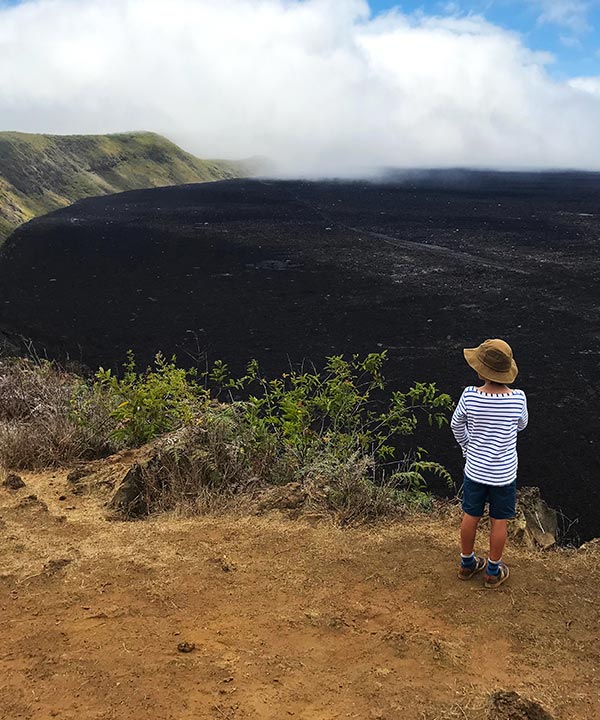 Santa Cruz is one of the four Galapagos Islands that is inhabited (by humans!), and the island we call home. Positioned bang in the middle of the archipelago, it boasts giant tortoise reserves, the Charles Darwin Research Station (the HQ for Galapagos Wildlife Research and the resting place of Lonesome George, the legendary giant tortoise), the town of Puerto Ayora, numerous wildlife visiting sites, ancient lava tunnels, beautiful beaches and … Galapagos Safari Camp!

“I love Santa Cruz for its variety, and the sense of freedom from not always having to follow a visiting track.

Although it is the most developed island in the Galapagos, its pockets of microclimates make it beautifully varied. From the stunning Tortuga Bay with its endless white sands, and surfing waves that allow you to paddle with sea lions, over baby sharks and among marine iguanas, to the lush Scalesia forests in the highlands and the giant tortoises that quietly roam these lands.”

Bartolomé is one of the smallest islands in the archipelago, yet it has a big reputation. Climb the wooden walkway, across lava fields and between sputter cones, to the top of the hill for a wonderful reward: spectacular volcanic views towards the famous Pinnacle Rock and surrounding islands. Arguably one of the best vistas in the Galapagos Islands, if not the most iconic.

Our Bartolomé day visit also includes a snorkeling trip in the clear waters along its southern shoreline. Here, you get the opportunity to snorkel with tropical fish, white-tip reef sharks, rays and – one of our personal favorites – the endemic, and utterly endearing, Galapagos Penguin.

“I love visiting Bartolome for its wonderful views and its emblematic pinnacle rock which, contrary to popular belief, is not a natural formation but was used as target practice during WW2. Our safari also includes a snorkeling trip and a chance to swim with penguins, which is an extraordinary experience, every time.”

On your stroll across the rocky landscapes of this small island, you will encounter a stunning menagerie of creatures, including sea lions, swallow-tailed gulls, red-billed tropicbirds, blue-footed boobies, marine iguanas, land iguanas and a rookery of nesting frigate birds.

The trail winds its way through a forest of palo santo full of nesting frigates, and along the shoreline, where marine iguanas bask in the sun and sea lions snooze under large boulders.

On this day trip, we also visit Bachas beach on the island of Santa Cruz, a lovely stretch of white sand which can only be accessed by boat. At the end of the second world war the American army left a couple of supply barges, the remnants of which can still be found (just!) within the sands. Behind the beach sits a brackish lagoon where flamingoes are often found. The beach is also home to marine iguanas, lava lizards, Sally Lightfood crabs and an array of sea birds. The water in the bay is calm and shallow, making it a perfect spot for snorkeling.

“On North Seymour, I love the fabulous proximity we are given to nesting frigates and ‘dancing’ boobies. During the boat trip, when you look out across Mosquera Island, there is something magical about watching all the sea lions dotted over the picture-perfect white sanded islet…” 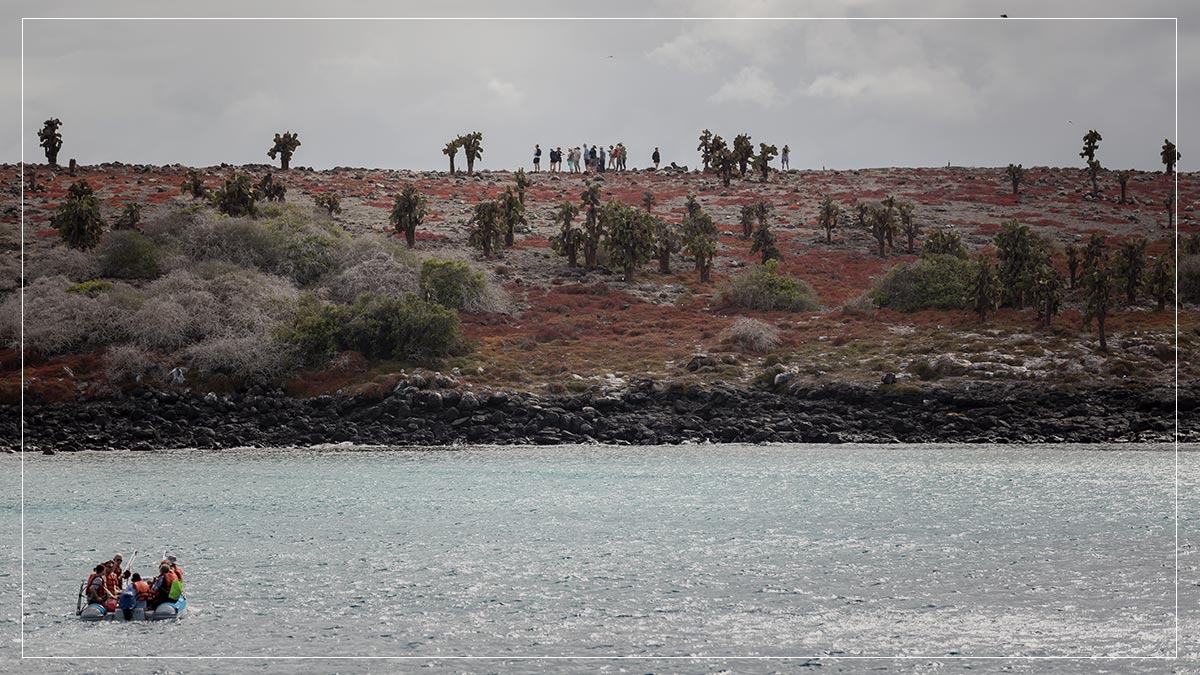 As you disembark on the tiny island of South Plaza – essentially a big rock in the middle of the ocean – you are greeted by a large colony of sea lions on the stone jetty. You might have to make your way round them to actually set foot on the island!

Walking among prickly cactus and beds of bright scarlet succulent plants, land iguanas appear left and right, as do marine iguanas. The island is so small that the two species have little choice but to share the land. Unlike on other islands where the marine iguanas stick to the shoreline and the land iguanas to the dry interiors, on South Plaza the two species are forced to ‘mingle’. Even their breeding seasons, which are usually distinct from each other, coincide on South Plaza. These unique set of circumstances have led to intergeneric breeding between (the more aggressive) male marine iguanas and female land iguanas. The result being a hidden, hybrid iguana. First spotted in 1977 by professor Howard Snell, this odd-looking, and presumably sterile specimen remains a rare find to this day. Indeed, South Plaza is the only island in the Galapagos where hybrid iguanas have ever been discovered.

Reaching the wind-swept, dramatic cliffs, red-billed tropicbirds, swallow-tailed gulls and brown noddy terns glide on the currents as the waves crash below: a true Galapagos exploration.

After your visit, there’s a chance to snorkel and swim in a nearby cove, hopefully meeting sea lions, turtles and myriad fish, and maybe even a white-tip reef shark or two.

“I love South Plaza for its carpet of sea-purslane bathing the island in seasonal changing colour, the surprising hybrid iguanas not seen anywhere else and the opportunity to observe old sea lion males withdrawing from their colonies and embracing the end of their life cycle.”

Composed of uplifted basaltic lava, Opuntia cacti dominate this rugged island, where you can observe land iguanas among the bushes (a species of land iguana that is endemic to Santa Fe itself), blue-footed boobies nesting amid their rocky nests, and – hopefully – Galapagos hawks, the archipelago’s top avian predator. These are often spotted perched on the highest points, scanning the domain for their next meals.

“At Santa Fe, I love the contrast of the vibrant turquoise water against the volcanic landscape and silhouetted opuntia cacti. Its raw landscape with its imposing giant cactus reminds us why the Galapagos inspired the theory of evolution. Why? Let me grow a little more so land iguanas cannot reach me. Perhaps Iguanas will grow giraffe-like necks in the future just as tortoises’ shells changed their shape to allow them to extend their necks and access food.”

Our tours on Isabela are not offered as a day trip but as a 3-day / 2-night Safari Extension.

Isabela is the largest island in the Galapagos and regarded as one of the most volcanically active places on Earth.

Once you’ve reached it by light plane or speedboat, explore the huge caldera of Sierra Negra, meet dozens of Galapagos species while on guided visits and snorkeling trips, and wander its sandy beaches.

“Why do I love Isabela? Simple, the Tunnels! They are my Galapagos highlight. I particularly love the thrill of surfing in and out on the boat and accessing the crystal clear waters, and the lava maze formations. Watching the little sharks and turtles swim peacefully from above, and then turning round to admire the imposing Cerro Azul volcano. And of course the flight to Isabela allows you to get a glimpse of many Galapagos islets from above.”

Other islands you can visit in the Galapagos

For those wishing to venture further afield, we can also arrange Luxury Galapagos Cruises. We work with a select group of small and medium-sized boats that we personally vet for safety and quality. A cruise can be booked in addition to one our land-based safaris or on its own.

Some of the islands that can be visited on a cruise include Española, Ferandina, Floreana, Genovesa, San Cristobal and Santiago.

When was the last time you saw something for the first time?