Things to Do with Kids in the Galapagos Islands

Can you be too young for the Galapagos Islands?

The Best Snorkelling Spots in The Galapagos Islands

“An understanding of the natural world and what’s in it is a source of not only a great curiosity but great fulfillment.” – David Attenborough 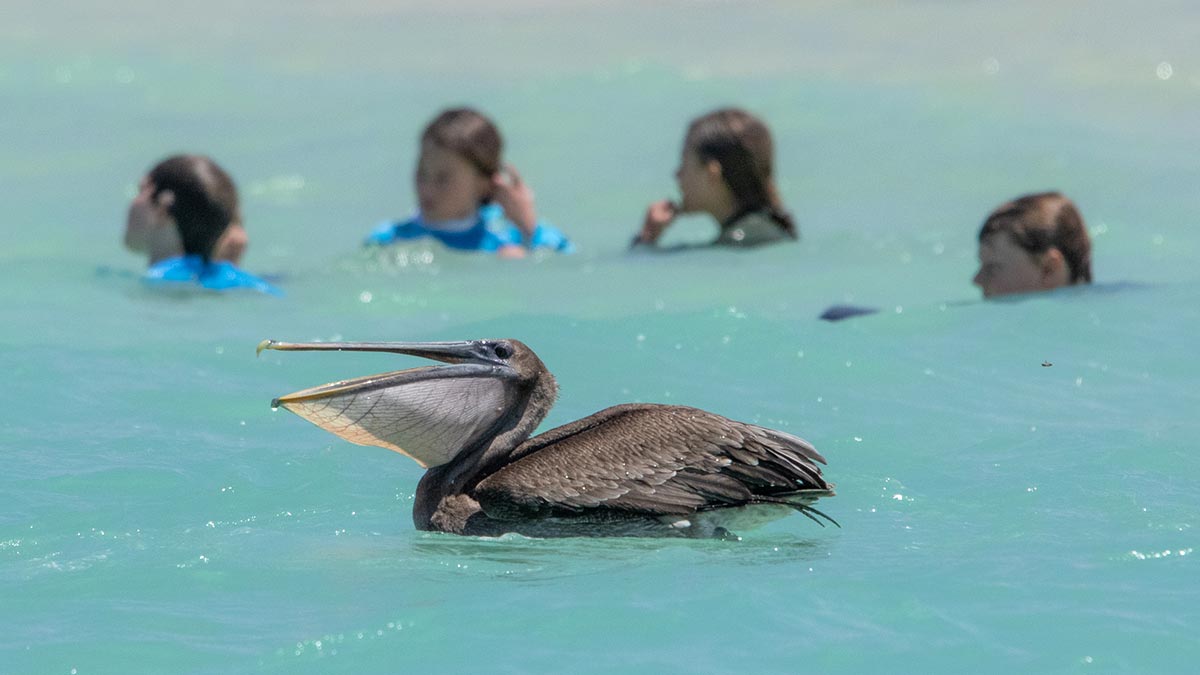 For kids the Galapagos Islands are a wildlife wonderland that ignite curiosity and spark the imagination. On our Family Safaris, their days are filled with adventure as they explore the nooks and crannies of Santa Cruz and nearby uninhabited islands that have captivated explorers for centuries.

At Galapagos Safari Camp, we believe in the transformational power of experiential learning. Our Family Safaris are designed to fully immerse children in the natural world by gently, and safely removing them from their comfort zones.

Here we list a few of our favourite activities to do with kids in the Galapagos. These have been tried and tested by our own children as well as numerous guests, and given the respectable rating of two-thumbs up. 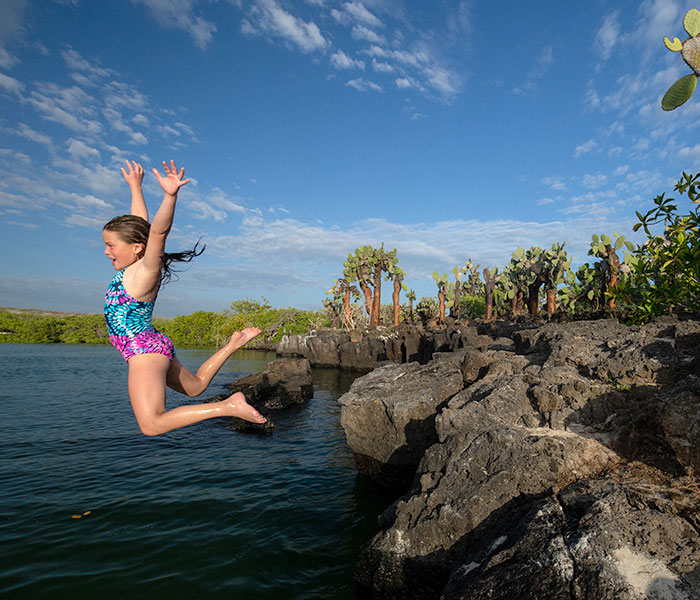 1. Look a giant tortoise in the eye

Close to our camp in the highlands of Santa Cruz, is El Chato, a giant tortoise reserve. This is one of the best places to see these gentle giants in the wild. The sanctuary is home to dozens of giant tortoises (the number depends on the time of year) that spend their days slowly roaming the tall elephant grass and thick shrubs of the highlands, or wallowing in warm muddy ponds.

It was the differing shapes of the giant tortoise shells between the islands – domes and saddlebacks – that first caught Darwin’s attention. They made him question how this happened. Certainly a good topic for children to ponder as they scramble inside one of the empty domed-shaped shell in the reception area. Why do the giant tortoises on Santa Cruz Island have dome-shaped shells? And why do those found on Española and Pinzón Islands have saddleback-shaped shells? (An ice-cream for the best answer..?)

In 1972 scientists made an extraordinary discovery. They found a Pinta tortoise on Pinta Island. This was a species presumed extinct in the early 20th century. Named ‘Lonesome George’ to reflect his solitary state, David Attenborough once described him as “a very important animal. Probably more than any other single creature. He’s focused the attention of the world on the fragility of our environment, and he’s stimulated science to look into whole new areas of research here in the Galapagos”.

Lonesome George died just one fortnight after Attenborough met him and delivered these words to camera. However, he still remains something of an international celebrity today. His body is now on permanent display at the Charles Darwin Research Station in Santa Cruz and serves as a symbol of hope for endangered species across the world. A must-see for the next generation of global conservation activists.

3. Catch dinner for your family 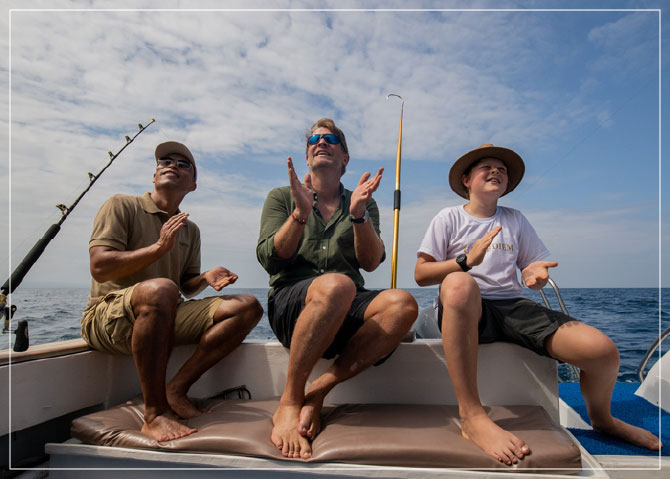 One of the highlights for kids on our Family Safari is our experiential fishing trip.

Commercial fishing was banned in the Galapagos in 1998. However, ‘experiential fishing’ or ‘artisanal fishing’ is allowed. The scheme, supported by the National Park, provides local fishermen with an ecologically sustainable alternative to commercial fishing (limits are set on how many fish each boat can catch, capped at 50lbs per trip). 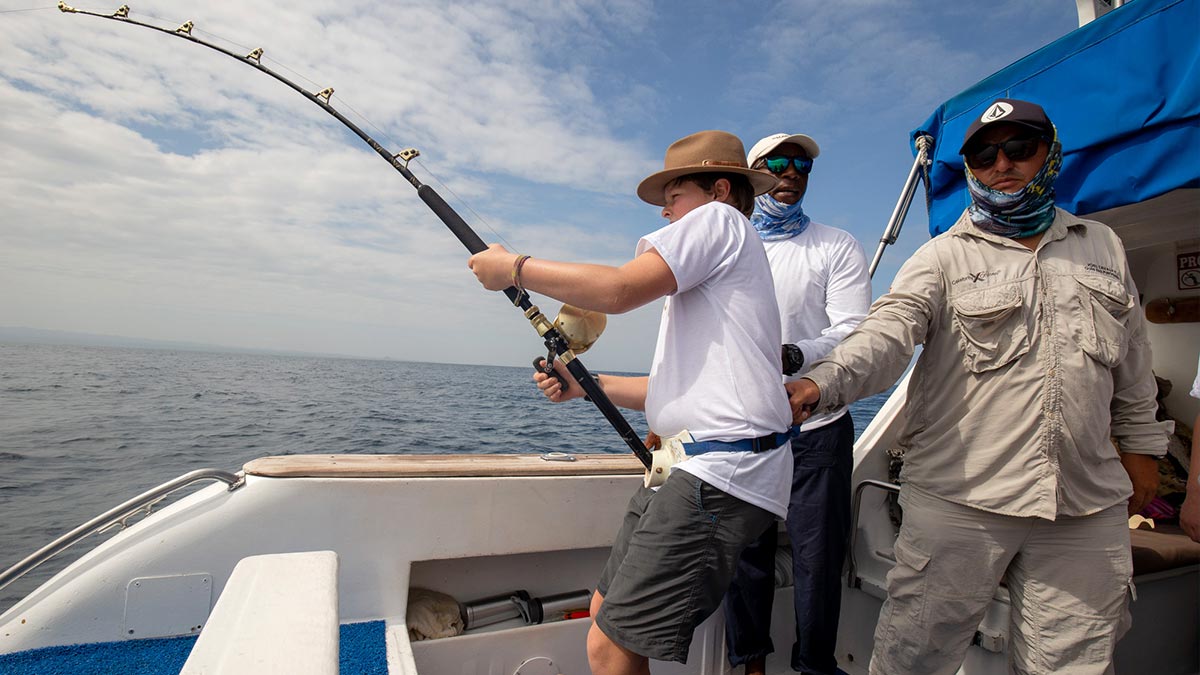 This trip gives kids the chance to try their hand at catching dinner for their family. Anything caught will be prepared by our kitchen staff back at the camp. The crew can also prepare sashimi right there on the boat. From ocean to table, this is a is a deeply rewarding experience for families, and a huge amount of fun!

On our day trips to uninhabited islands, kids have the opportunity to explore the amazing underwater world of the Galapagos Marine Reserve. As with any wildlife safari, we can’t guarantee that specific creatures will show up, but snorkeling alongside sea lions, penguins, marine iguanas, sea turtles and shoals of brightly-coloured fish is not uncommon in the Galapagos. If you are extra lucky, you may even be approached by a pod of curious dolphins. For kids, it can be a little like diving into an animated Disney production and an experience that will likely heighten their appreciation for the Blue Planet and all its wondrous spectacles.

5. Explore the highlands on bike

At Galapagos Safari Camp, families can borrow bicycles to explore the quiet country lanes of the highlands, that are often frequented by giant tortoises. 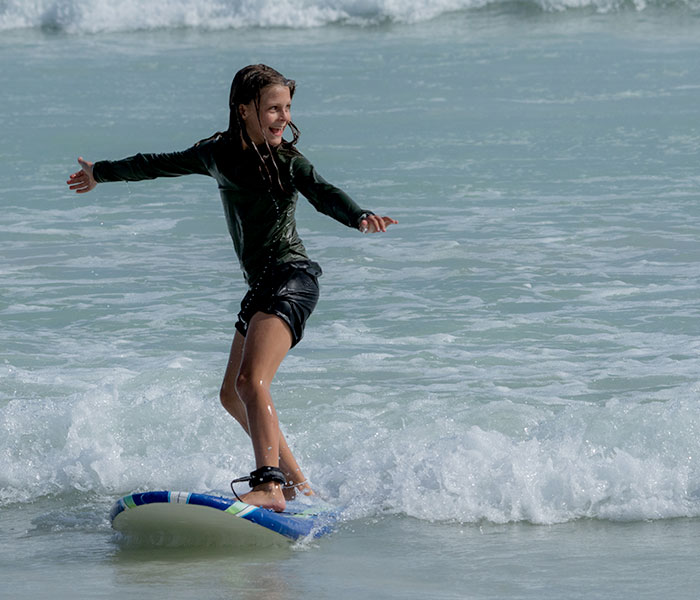 Our Family Safaris can include surf lessons at Tortuga Bay on Santa Cruz. Listed by TripAdvisor as one of the Top 10 Beaches in the World, “you can be face-to-face with more strangely fearless and curious animals than anywhere else on earth”, as zoologist Mark Carwardine discovered. One such creature is the Marine Iguana. These prehistoric-looking ‘Imps Of Darkness’ are regularly seen shuffling across the powdery white sands of Tortuga Bay, elbows stuck out at right angles, making a beeline towards the ocean’s surf; or poised like stone statues under the hot Ecuadorian sun.

Endemic to the Galapagos Islands, these aquatic reptiles are the only ocean-going lizards in the world, having adapted so that they could forage underwater – a great lesson in evolution for kids! 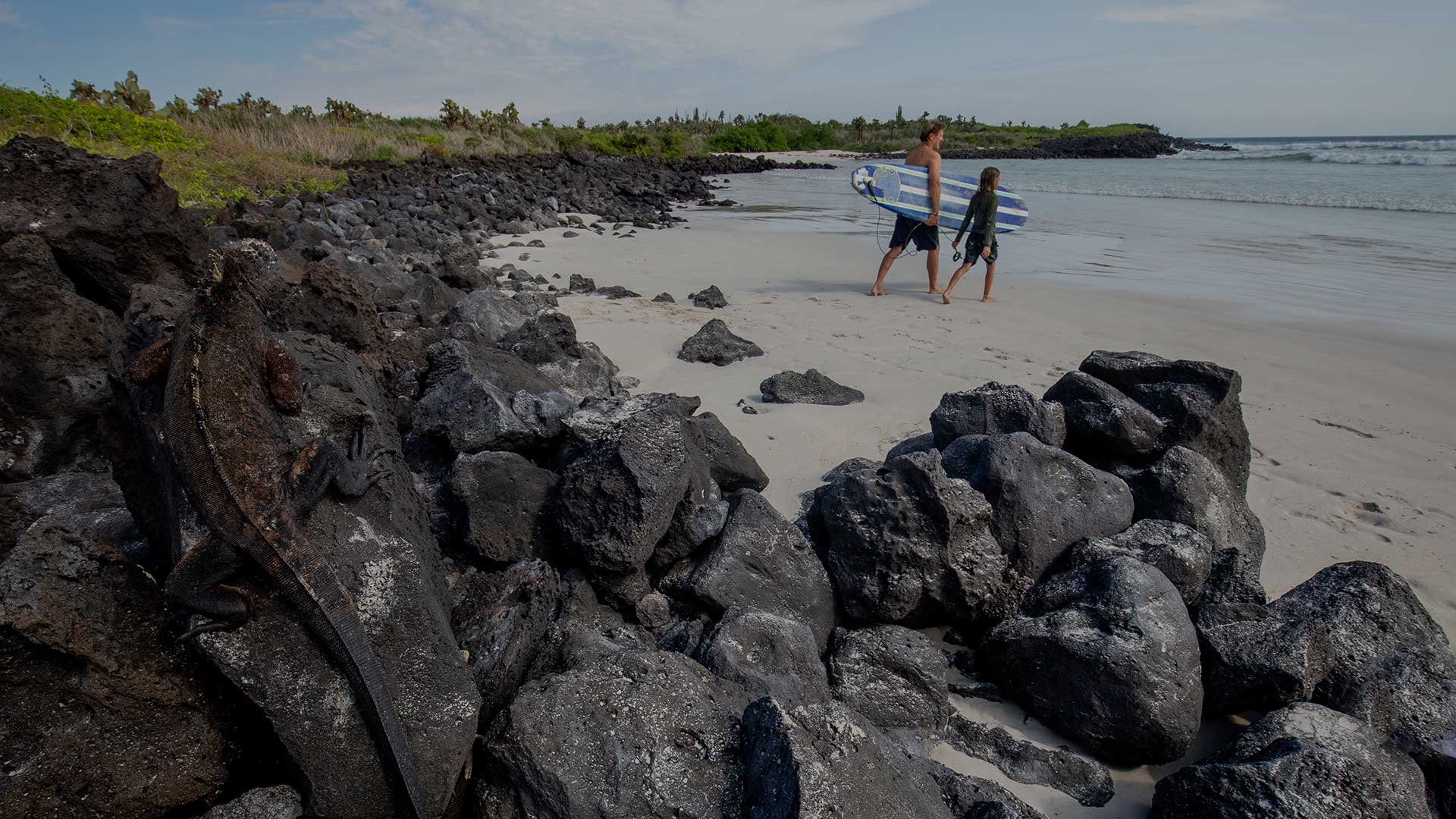 Taking a surf lesson alongside these extraordinary animals is a reminder of just how unique these islands are. Nowhere else on earth would children have this experience, this privilege. Now kids, put that in your playground pipe and smoke it!

We work with local surf instructors who know how to teach kids of all ages the basics of hanging ten. And as with all our disclaimers, we can never 100% guarantee a specific wildlife encounter!

7. Fall down the ‘rabbit hole’ 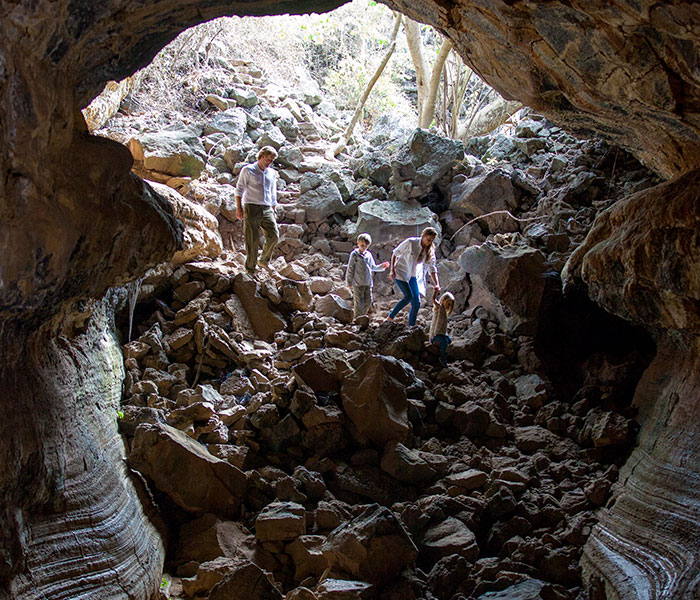 Santa Cruz is home to a network of lava tunnels formed centuries ago when lava cooled at the edges but kept flowing in the middle. Our Family Safaris can include lava tunnel sites where you and your children can descend beneath the earth’s surface to learn about the origins of the islands. And who knows, you may even be invited to a Mad Hatter’s Tea Party! (For special family occasions, we can organize a surprise tea party in a lava tunnel. For more information, please contact one of our travel consultants). Curiouser and curiouser!

8. Kayak the bays and creeks of Santa Cruz 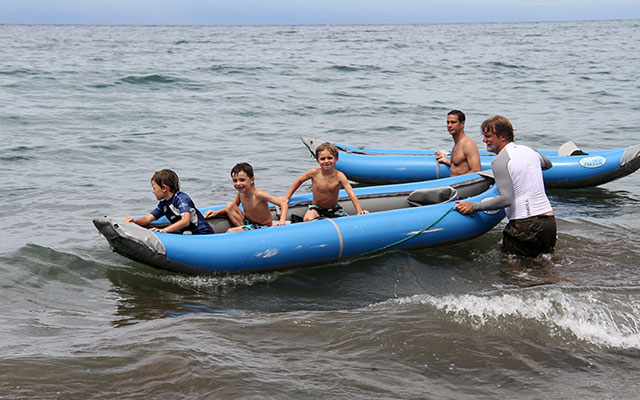 Our Galapagos with kids program can include kayaking with parents along the shores of Santa Cruz Island. These excursions give the whole family the chance to see sea turtles and colonies of nesting birds, as well as the opportunity to enjoy the tropical waters of the island at their own pace.

9. Hike up an active volcano

Our Family Safari Isabela Extension gives families the opportunity to visit Isabela, the largest of the Galapagos Islands. Here you can hike up to the giant volcanic crater of Sierra Negra. Spanning a distance of over 7 x 9 km (5 x 4 miles), the caldera is the second largest in the world. Although the volcano remains active today, seismologists monitor it very carefully to ensure it’s safe for tourists to visit.

Although a long hike for little kids (3-5 hours depending on your finish point) the views across the caldera are spectacular and worth the effort.

Here the fascinating geology of the islands is brought to life for children. Beyond the caldera are crusty lava fields which active families can also explore further. Unlike many tours to Sierra Negra, ours are private, which mean that our guides are fully flexible and only take you as far as you and your children feel comfortable going.

10. Get creative in our Kids’ Club

During peak seasons and over family holiday periods, our Kids’ Club is open in the afternoons. This gives parents a much-needed break as well as the chance for little kids to unleash their creativity. Activities are tailored to the individual and can include pizza-making, Spanish classes, animal scavenger hunts and art projects taught by local artists. 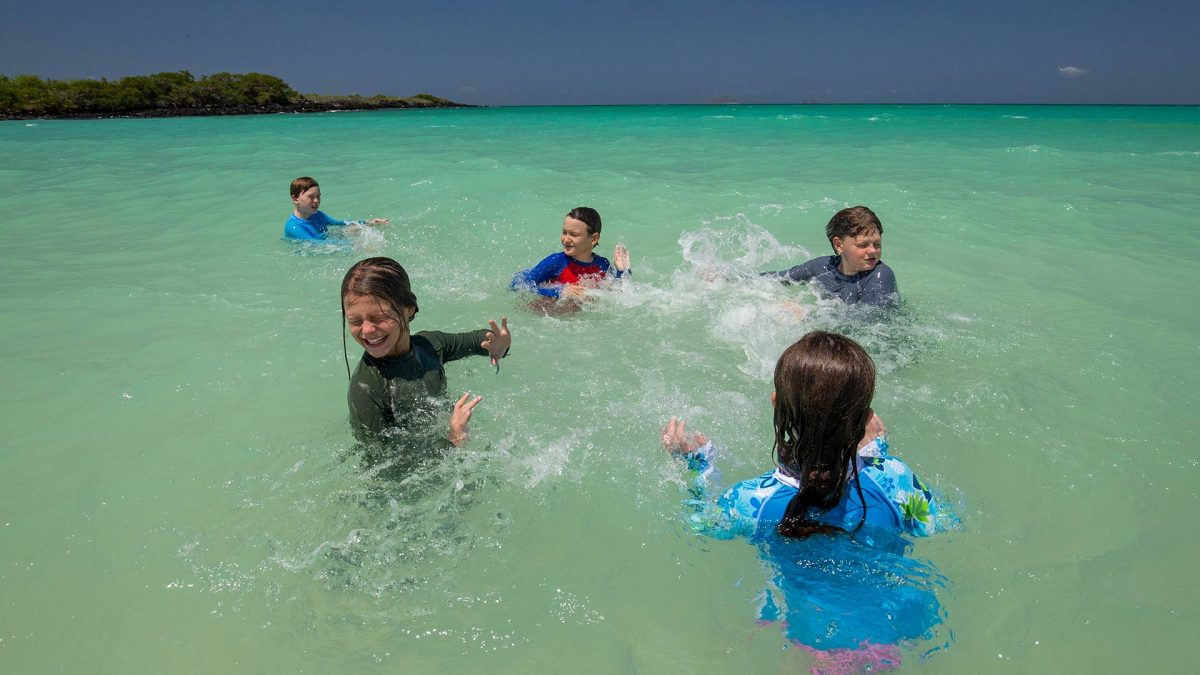 For more information about our family safaris, contact a member of our team today.

For more information on traveling in the Galapagos Islands with kids, please see Our Ultimate Guide To The Galapagos With Kids 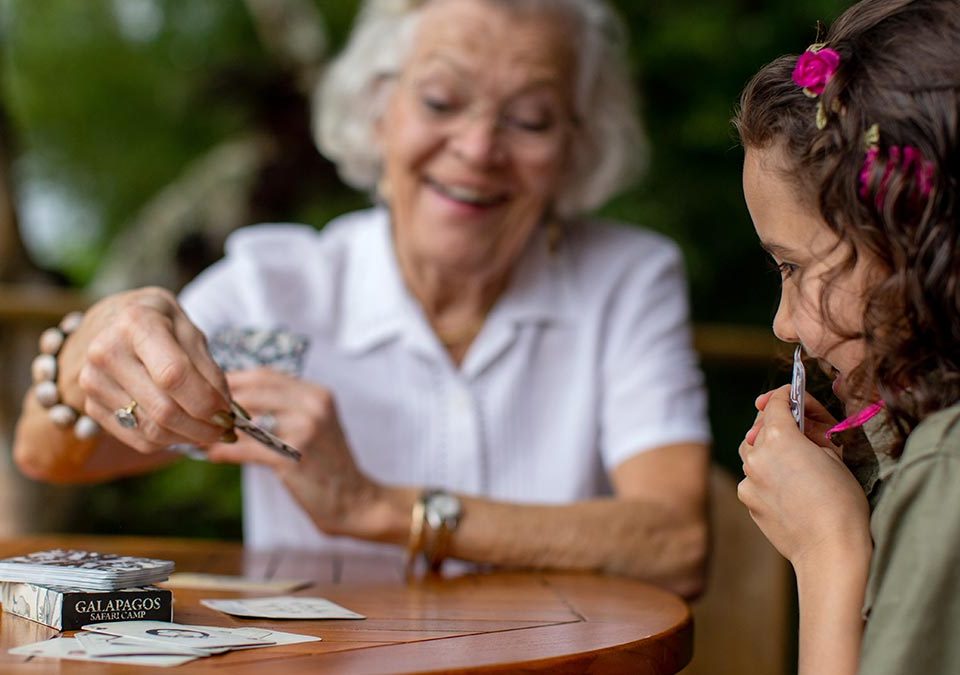 A Grand Galapagos Safari – A Wildlife Adventure For All The Family