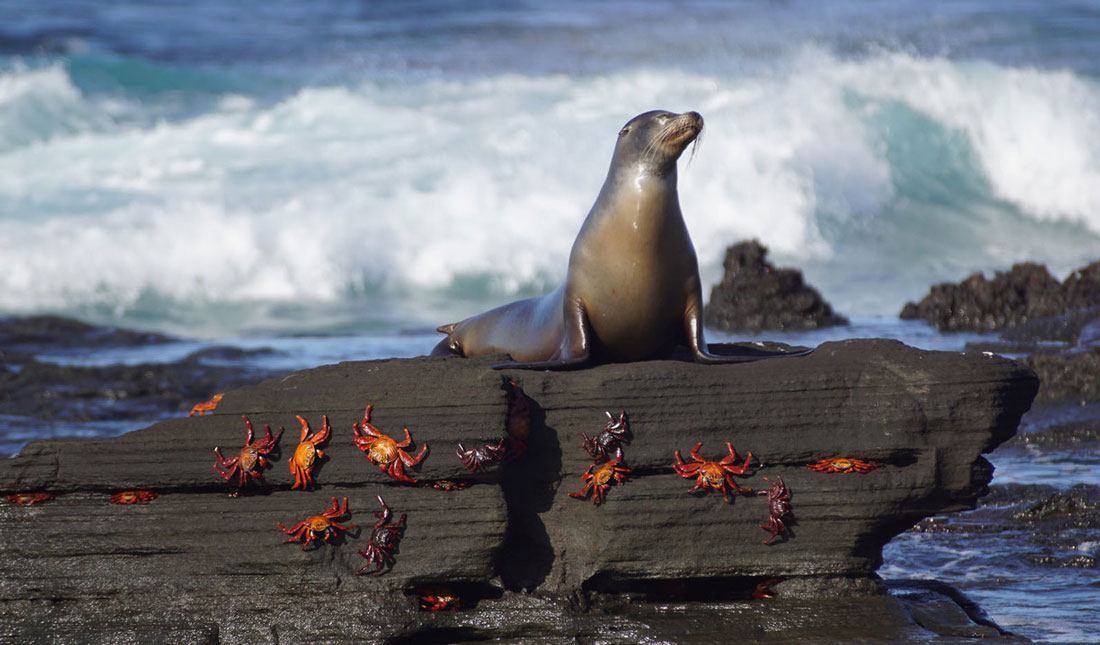 How to visit Santiago Island

Located to the northwest of Santa Cruz, Santiago Island is usually visited on a Galapagos cruise as it is not an island we visit on day trips from Santa Cruz.

The most frequented visitor site by the cruise vessels is Puerto Egas, in James Bay on the western side of the island. It’s a good site for snorkelling and spotting a healthy cross-section of wildlife.

The port is named after Héctor Egas, who started a doomed salt mining operation on the island back in the 1920s, which lasted until the 1960s. It’s said that early tourists to the islands encountered an employee of Mr. Egas here — he was waiting for his boss to return from the mainland and was a true castaway, living alone here for four whole years. Today, not much remains of this human settlement, bar some crumbling walls and floors at the bay.

The island’s black basaltic lava rock forms pools and crevices that are home to Sally lightfoot crabs, anemones, urchins, octopuses and eels. They in turn attract a host of shore birds, oystercatchers, herons, ruddy turnstones and noddy terns looking for a tasty meal.

The trail leads westwards along the inter-tidal zone. The shore rocks here have been carved by the erosion of the sea into amazing grottoes and pools, where fur seals laze on ledges or dive and swirl in the turquoise waters below. One of the highlights of visiting Santiago Island is walking and skipping over the natural rock bridges that have formed along the shores, between spotting the fur seals, marine iguanas and marine turtles who inhabit the pools. One of the pools has earned the dubious title of “Darwin’s Toilet”!

One returns to the beach along an inland trail, the Pan de Azúcar (Sugarloaf) tuff cone volcano rising to one side above the scrub and acacia trees. Look out for Galápagos hawks perching and eyeing the horizon in this area.

North of Puerto Egas, on the other side of a lava flow, one comes to Playa Espumilla, an ochre beach cupped by mangroves. Here one can observe the nests of marine turtles. You may even be fortunate to encounter one lumbering to or from the shore. Taking the trail up from the beach, one reaches a salty lagoon, passing through thick vegetation, full of flitting Darwin’s finches and flycatchers.

Further north still, cruise ships pass by Buccaneer Cove, a hide-out for pirates and freebooters in the 17th and 18th centuries. This cove was the site where the explorer Thor Heyerdahl found ceramic shards that pointed to the occupation of the islands (probably on a temporary basis during the rainy season) by fishermen from the South American mainland.

Visiting Santiago Island might also include disembarking at Sulivan Bay, named after Bartholomew James Sulivan, a lieutenant on the Beagle. This is a fascinating visit to another-worldly destination, a world of lava. Walking up from the shore, one walks across the expansive, ominous, black lava field. This is pahoehoe lava, which comes from Hawaiian word to describe rope. And the lava does indeed look like wreathes of rope, but in this case, was formed by molten lava cooling in mesmerizing patterns of squiggles, tongues, pimples, cracks and crevices.

Santiago Island was the subject of one of the Galápagos National Park Service (GNPS) and the Charles Darwin Foundation’s efforts to confront the problem of introduced species. Here, donkeys, feral pigs and goats that had brought by Mr Egas and his settlers were eliminated entirely from the island in the 1990s. This enables the original endemic and local species to recover. The largest island of the archipelago, Isabela, benefitted from an ambitious goat eradication project that has since allowed for the re-introduction of giant tortoises, whose populations had previously been decimated by the competition for resources from goats.

Plan your Galapagos Vacation
See our Safaris for our suggested extensions and recommended activities, or contact us for a tailored itinerary.