Isabela Island, Galapagos: Everything You Need to Know

If there ever was an animal whose tenderness and affection towards its significant other were to be considered romantic, it would have to be the Galapagos Albatross. They are not only birds that mate for life with their partner but, as part of their love dance, they kiss each other passionately (in bird terms, of course). It does seem like they’re dueling, but hey, their beaks are just too long for comfort!

This is one of those Galapagos tour experiences that makes you feel like David Attenborough is going to suddenly walk in and say something deep and enlightening about life on earth. You’re atop windy Española, the Galapagos archipelago’s southernmost island and suddenly you catch sight of a dozen plump, yellow-beaked birds, “romantically” rubbing their necks or standing, facing each other, hitting their beaks. It’s a curious beak kiss indeed. This dance, although it may not look like it at all, is the closest thing to slow-dancing in the animal world. It’s one of nature’s most special expressions of love, and a one and only possibility to see it. It is the only place in the world it occurs, so yes, David Attenborough was there…

David Attenborough and the Galapagos Albatross

“If love, as we understand it, exists in nature, then surely this must be it” – David Attenborough

The Galapagos Albatross, also known as the Waved Albatross, not only has one of the longest wingspans of all living creatures (only a foot short of Wandering Albatross’s wingspan, a close cousin, which holds the wingspan record), it can also spend up to five years at sea without ever touching land. If we’re lucky, a great Galapagos tour experience is spotting an albatross, as you navigate from island to island, soaring above or bobbing up and down in the water, where it rests and sleeps when not airborne.

Where to see the Galapagos Albatross 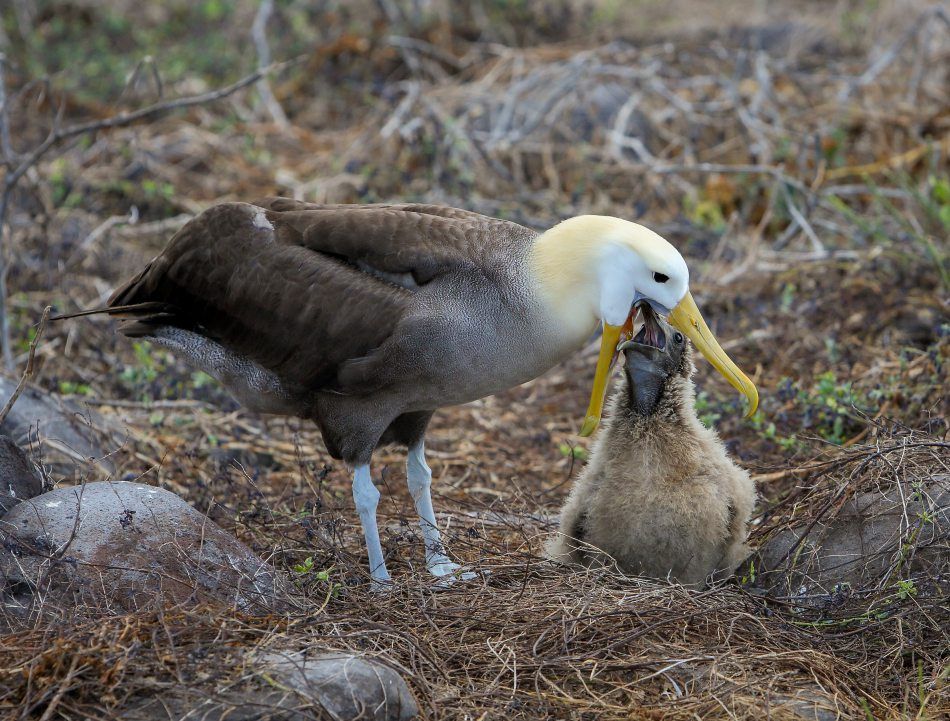 Albatrosses have chosen the tiny blip of Española Island, in southeastern Galapagos, to breed and nest. Here, they meet up with their mate to procreate, as you can see in the video linked above, after a long sejour at sea. They recognize the “love of their life” as he or she arrives at the island, and beak-kiss and bawk at each other for hours as if catching up on all that has happened since the break-up.

At Española, they will stay for several months, getting intimate, laying their eggs, tending to them and when the chicks hatch, taking care and feeding them until they are old enough to fly off into the sea like they did, in their own gallant youth, to find their special “love of their life” and do the same, right here, on this very corner of the Galapagos Islands.

Other sightings of the Galapagos Albatross

The Galapagos Albatross is a critically endangered species. Apart from Española’s medium-sized breeding colony, there are only two other (very small) known colonies on mainland Ecuador’s Isla de La Plata and Genovesa Island in northern Galapagos. The rest of the time, Galapagos albatrosses spend their flying years over the continental seas of Peru and Ecuador and are very hard to come across!


See our Safari Holidays for our suggested Galapagos itineraries and recommended activities.